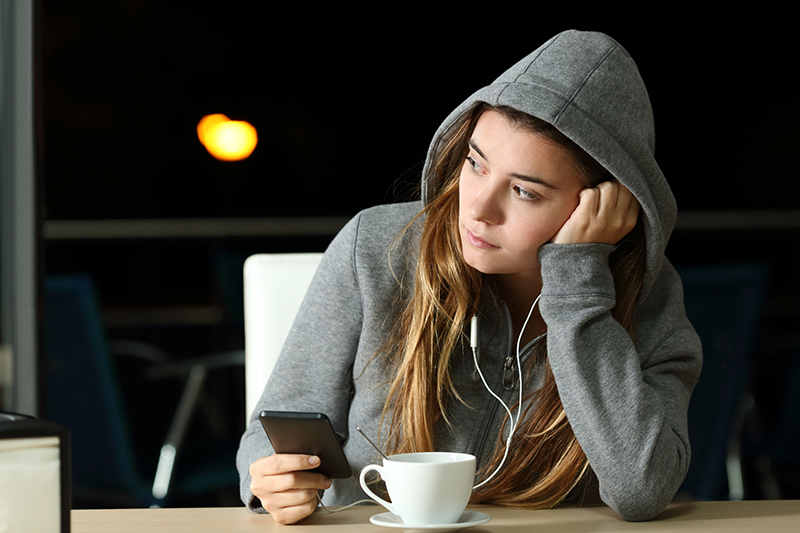 “I feel like I don’t know my own child.”

I’ve heard that sentiment from many parents in my practice when talking about their teenagers. For many, it’s only the typical teenage stuff—some moodiness and angst that are common in a rapidly developing brain.

For others, though, it was more serious: a mood disorder like depression: The odds of adolescents suffering from clinical depression grew 37 percent between 2005 and 2014. These parents would ask me “How am I supposed to know the difference?” My response often surprised them because depression doesn’t present the same way in teens as it does in adults.

Age has a great deal to do with cognition, and any good child psychiatrist’s first question when presented with a new case should be “What is their age?” Brain development and the hormonal changes of puberty directly affect cognition, mood, and moral development. Accordingly, some of the cardinal symptoms of depression in adults can look quite different in teens.

Recognition is key to seeking and receiving the right treatment. Here are some of the key differences in the way depression presents in teens and adults:

Mood: How do they feel when they’re depressed?

In contrast to adults who often report feeling sad or empty, teenagers are much more likely to become increasingly irritable, sensitive, impatient, impulsive, and defiant. All of these things in small doses could be considered typical teenage moodiness, but unusually high amounts could amount to a warning sign.

Timing: During the course of a day, when do they tend to feel worst?

We all have times of day when we feel at our best and at our worst. For those suffering from depression, the times they feel worst is more than feeling fatigued. It’s when they feel most alone and when their thoughts are darkest. For adults with depression, this time tends to be the early hours of the morning, when no one else is up, or mornings. For teens with depression, it’s usually right after dinner. The business of their day with school and family time is over, and it’s the first time they can be alone with their thoughts.

Physical state: How does it affect the body?

Adults: Likely to have excessive sleeping (hypersomnia), experience psychomotor retardation (slowdown of thoughts and movements)
Teens: Not as likely to demonstrate hypersomnia, also have more variation in weight and appetite

Depression in adults is more likely to result in vegetative symptoms such as sleeping more, fatigue, low energy, and psychomotor retardation. In contrast, teens are less likely to have sleeping too much but have more variation in their appetite, resulting in changes in weight.

Ideation: What do their thoughts center on?

Adults: May be so depressed that they have delusions
Teens: Do not have delusions as often, grades and school performance suffer, commonly have comorbid attention deficit disorder, oppositional defiant disorder, anxiety disorders

Suicide: How likely are they to make an attempt?

Suicide attempts are rare before age 11, but become more common and more likely to be lethal as teenagers become more able to think abstractly. In general, the older and smarter you are, the more likely you are to commit suicide. This has created a public health crisis since suicide is the second highest cause of death among teens. Self-harm (even when there is no suicidal intent), hopelessness, impaired family functioning, abuse, and loss of a parent by death or divorce are all predictors of suicide. The most crucial sign is prior suicide attempt, making suicide 60 times more likely.

Treatment: How to they best improve?

For mild depression parents should seek the help of their family physician, or school counselor to obtain referral to a therapist.

The best treatment is for moderate to severe depression is often antidepressant medication in conjunction with cognitive behavioral therapy (CBT). Fluoxetine and escitalopram have FDA approval for the treatment of depression in adolescents.

However, a meta-analysis has found that 24 different medications actually double the risk (from 2 to 4 percent of teens with MDD) for suicide ideation, but not suicide completion. In 2004, the FDA made manufacturers of antidepressant drugs add a black box warning for adolescents to alert providers to an increased risk of suicidality in adolescents. In 2006, this warning was extended to those 18-24 years old.

One unfortunate result of these warnings has been an increase in rates of suicide since then—not only for adolescents and young adults, but also for adults in general. Prescribing medication, with at least weekly follow-up for the first month, is essential in the treatment of depression.

By Jonathan B. Jensen, MD
Child and Adolescent Psychiatrist and Sanvello Clinical Advisory Board Member

Dr. Jensen served on the faculty of the University of Minnesota Medical School for 37 years and was director of fellowship training in Child and Adolescent Psychiatry for 26 of those years. His publications include the areas of Major Depressive Disorders, Attention Deficit Disorder, Psychosis in Adolescents, Bipolar Affective Disorder in Adolescents, Autism Spectrum Disorder, Obsessive Compulsive Disorder, as well as psychoneuroendocrinology in ADHD, MDD, and ASD.